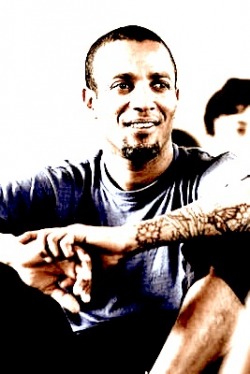 Contact improvisation and improvisation have become my new source of inspiration.
It all started with me meeting kirstie Simson with whom I have performed quite on a regular basis (London, Copenhagen, Italy). I have been influenced and inspired by exploring, studying and dancing with teachers such, K.J. Holmes, Andrew Hardwood, Julyen Hamilton, Charlie Morrissey, Martin Keogh, Nita Little, Keith Hennessy, Adrian Russi among others.

I have been working for the past 25 years as a freelance dancer, taking part mostly in projects and working with and as an independent choreographer.
While in NYC  I started a company, Sanza Nemo Dance, with best friend choreographer, Guido Tuveri. the company's work was based on theater dance and partnering work.

My Experience as a teacher and performer does not only include CI. For many years i have been teaching and i still do, contemporary dance classes using Release technique and Klein technique as a base. As a performer I mostly performed set works. Even if improvisation was use as  part of the creative process nevertheless the final result would be set.
I must admit to find it quite interesting to be able to experience and explore both ways .(to find out more enter).

My investigation into contact improvisation and improvisation was quite chopped off for a few years since my career as a more "traditional" dancer was soaring and i became quite involve with the Danish dance scene and with  choreographers such as: Camilla Stage, Anders Christiansen, Aben Dans… and as well into making my own work which was develop into a series of solos under the name “the Chrysalide project”.

My meeting  Kirstie Simson redefined my view on contact improvisation and improvisation. I was very impressed and attracted by the honesty and the fearless beliefs that she showns while teaching and performing. I got very involve with her and her work and started an annual meeting where we would with a group of dancers explore improvisation as a performing art form.

As I  began to teach CI, I started within the process to develop a few themes of interest such as “ weight and weightlessness”, the body in motion”, “making contact” and “surrendering within CI”.
I was invited twice to teach at the zipfestival in Orvieto Italy, as I have been teaching for the Scandinavian group “kimpro” and in workshops in Italy, Switzerland, Germany, Scandinavia…

In 2006 I moved to Rome and join “RomaContact”, an independent collective of dancers first founded by Simonetta Alessandri. We are involve in spreading and sustaining the practice of CI in Rome. We are teaching and proposing jams twice a month, as well as performance and performing spaces. In October we are organizing the International Jam of Rome.

For me the body is the perfect environment for exploration, for it reflects so well our current state of being and the society we’re living in. Improvisation and CI are great tools to get in touch with all these different aspects. We keep moving through life purposefully and so often we forget to get in touch, to get in contact with what's happening within us.

The awaken state in which we ought to be in order to achieve the “moment” within our dance is the reason of my current interest in CI and improvisation as a performing art and as a practice. The honesty and vulnerability of such exchange between performer and audience; both facing the unknown.

In 2007 i met  Charlie Morrissey and Adrian Russi at the Zipfestival in Orvieto, Italy  we've working since under the name of “Moving Men”, performing  and teaching in Switzerland, Germany, Italy, Holland, Poland, England and Russia.

“Improvisation allows me to be in the moment and to face my fear of the unknown. There is a feeling of fullness in time and space.I don't feel the need to please the audience or myself but I am simply responding to what is given to me in that moment. Preconceived ideas are instantaneously being dissolved by constant change.The combination and possibilities are endless; It could be called freedom."